When Shafie Apdal was the former Minister of Rural and Regional Development for seven (7) years, his ministry then had billions of ringgit at his disposable yet failed to make any significant contribution.

IF Shafie was honest and IF his ‘heart’ was with the people of Sabah, he would have helped Sabah when he was the minister then. After he was sacked (pecat) from the Federal Government, he had no choice but return to Sabah. He then formed Warisan.

Now, his agenda changed. As chief minister today, his pre-election pledge was to help Sabah and its people. Can this politician be trusted?

What has he has done for the people in the last two years as chief minister? Where are the promises he made to Sabahans? Sabah is poor in socio-economic development. More than half the 3.9 million Sabahans are struggling because of the state’s poor economy. Look at unemployment – Sabah has the highest unemployment in the country.

In what seems like a contradictory move, he seems more interested to help China. Do you think China needs your RM1million fund to save COVID-19 patients? It’s the people of Sabah that need the money more, chief minister!

The people of Sabah hear all about investment plans and new projects but nothing beneficial to the people have come into fruition. In fact, Sabah’s economy is getting worse and unemployment is increasing.

Instead of projects like the Papar Dam, which costs billions of Ringgit and that can create environmental damage, Shafie should focus on socio-economic projects that can benefit people.

What is worse, Shafie interferes in private businesses. He prevents investments that can bring benefits to the state. Sadly he refuses to see the benefits of good sustainable/green projects that can create thousands of new jobs and help people earn more money, while improving the economy.

Take for example, Sipitang. What happened to the promises Shafie made to the people/workers of the Sabah Forest Industries? Over 1,000 plus employees are very worried about their jobs because he interfered in the business dealing, and today the problem has become a legal matter.

If Shafie is sincere about helping Sabah, he would have appointed qualified state cabinet ministers. Instead, he appointed associates/friends as ministers because they supported him during the GE14.

Junz Wong, Peter Anthony, Christina Liew,  Mohamaddin Ketapi, to name a few, should be replaced with qualified personnel. But Shafie is not ‘sacking’ them because he is ‘too soft and weak.’ How can Sabah become a successfully developed state if the chief minister is weak?

Shafie has displayed his inability to step up and play the role of a capable leader of the state. Its for that very reason he seem all too keen to pledge his unwavering support to Tun M and the federal government which he is extremely dependent on for financial support and to keep him in power. 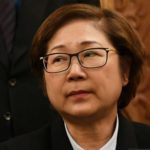