Is Hong Kong-listed, Lee & Man Paper Manufacturing Ltd (Lee & Man Paper) a front for China’s surveillance and investment? Why is the China company so interested in Sabah Forest Industries Sdn Bhd (SFI) in Sipitang and even offering Shafie Apdal’s government a ‘good deal’ – 30% equity in SFI in exchange for allowing the company to manage manufacturing operations?

What is Lee & Man Paper hiding from the public? Is the company putting a plan that would result in Sabah losing her assets?

In fact, Lee & Man Paper is already working closely with Grant Thornton Consulting (GTC), the receiver manager of SFI, and the Sabah Statement Government to acquire the SFI assets through ‘back-door’ channels.

However, there appears to be a hiccup because a Sale & Purchase Agreement (SPA) for the SFI assets has already been signed with another purchaser. Shafie Apdal and GTC now want to cancel the earlier SPA to bring in Lee & Man Paper. The matter is now in Court.

What is suspicious is that Lee & Man Paper has a bigger agenda. After buying into SFI, they will then tell Shafie that they need state-of-the art port facilities to do import-export business of SFI’s manufactured timber products, pulp & paper, etc.

Because Sabah’s ports (Port of Sipitang – 2-berths; Sapangar Bay Container Port – 4-berths), lack capacity and must be expanded, Lee & Man Paper then introduces China Harbour Engineering Company – one of Beijing’s largest state-owned enterprises. For the record, China has financed about 35 ports globally since 2008.

To sweeten the deal, China will ‘help’ finance the re-development of the Sipitang and Sapangar ports to transform them into ultra-modern and integrated port facilities.

Sadly, Shafie would have allowed for the State Government to fall into a ‘debt trap’ because the state government is not in a financial position to repay the loan. So, when the Sabah government defaults on the loan, China would not be ‘so friendly’ anymore and would take-over ownership of the ports and assets.

Look at the port of Hambantota in Sri Lanka. China gained control of the port after the government failed to settle its debts. The government was forced to hand-over the port and an additional 15,000 acres of land under a 99 year lease to China in December 2015.

This transfer gave China control of territory just a few hundred miles off the shores of India, and strong presence along an important commercial and military waterway. It is China’s aim to gain control of major shipping lanes in the region. This is would not only give leverage to China’s military but it is also a business strategy under China’s Belt & Road initiative.

Once, China gains control of the Sipitang and Sapangar ports, they will have exclusive control over the seaways and shipping routes in the Borneo archipelago and the Asia-Pacific region. This will undermine harmony amongst countries in the region.

Shafie is always looking for money and an easy way to resolve state problems. He seems to favour China-based companies because they have money. This is dangerous because of their ‘hidden agenda,’ that could undermine harmony and socio-economic well-being of the people. 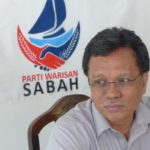