Sabah Kita is indebted to Datuk John Lo for bringing the issue of SFI’s takeover into the mainstream media. In his latest Inside Out column, Datuk John Lo bravely took on the controversy swirling around the takeover of Sabah Forest Industries (SFI). Allow us to kindly respond with some context.

Datuk Lo mentioned Grant Thornton Malaysia, the appointed receiver/manager for SFI, was bound by a set of professional ethics to get the best possible deal for SFI’s principal shareholders which are currently Ballarpur (98 percent) and the Sabah government (2 percent).

The reality seems to be very different. Grant Thornton’s (GT) actions, in their advisory capacity, with regards to SFI’s sale have been far from ethical.

Sabah Kita has been made to understand by rumblings on the ground that GT’s dealings with SFI’s Integrated Timber Complex (ITC) is less than ethical, closing an eye to illegal foreign workers and illegal sale of logs. We know that SFI’s ITC is currently operated by a Taiwanese company which had previously been caught and suspended for illegal logging by the state. However, Grant Thornton has inexplicably facilitated their return. GT has also summarily and constructively dismissed many of the Sabahans in their employ whom were protesting this and many other instances of being sidelined and disrespected. Where is the justice for our fellow Sabahans?

Our opinion is that the only standards of ethics Grant Thornton is following are the ones set by the likes of EY and Deloitte in their handling of 1MDB.

Datuk Lo next wrote that it wasn’t important whether a Malaysian or foreign entity owned SFI as long as the interests of Sabahans are being cared for.  Respectfully, he seems to miss the point that the Sabah leadership’s choice seems to be foreign, especially Chinese-owned entities. Upon our research, we were horrified by the past practices of Chinese Pulp and Paper companies in the region. They are certainly not winning awards for their sustainable business practices. Their pulp and paper foray in Vietnam resulted in large scale environmental damage to the Mekong River delta which is a lifeblood to Vietnamese farmers and villages.

Chinese companies also have a proven track record for bringing in thousands of their own workers which stops employment for locals. They have no respect for the local culture and act according to their own whims which disrupts the local harmony as well. Indonesia is currently going through the same problems. Many Chinese companies there have been accused of flaunting the law, bribing institutions and the government and deliver sub-standard products. Datuk, we hope you know what happened in Sri Lanka when they brought in the Chinese to build Hambantota port. Another example is the widespread pilferage that happened in Africa by these companies.

Datuk Lo then mentions that no Malaysian company has expertise across the world paper market. We completely agree with Datuk Lo. But that begs the question – if that statement is true no 3rd world or developing country should get involved in any sector they don’t have experience in?

SFI, ITC, POIC and the rest are critical assets for Sabah and are of national interest, yet Datuk Lo supports a takeover by Chinese companies. We hold the view that strategic JV would be more appropriate as it provides valuable technology transfer to local Sabahans. The question we must answer … is if we are happy to just continue being the largest durian exporter to China. What message or legacy are we going to leave for our grandchildren? Where is the Sabah pride?

History is our greatest teacher. Poorly understood contractual agreements with foreigners have got us into trouble. The industries we have started in the past have mostly failed due to history and interference, greed of politicians and individuals. Moving forward, the new Warisan and PH government must move ahead from this selected favoritism and allow free enterprise to thrive within the ambit of the law. Long term interest of Sabah can only be safeguarded, when all parties sit down and work together and plan for the future today, with the interest of Malaysian people in general and Sabahan people in particular.

The problem with Ballarpur’s management of SFI was the complete lack of understanding of local culture. They brought their own people from India and even the canteen catered mostly north Indian cuisine. At one point, the canteen food was dubbed the ‘best Indian restaurant in Sabah.’ Ballarpur’s inability to swim with the changing currents saw it make a tremendous loss. The same – or even worse – could happen to SFI if foreign take over.

Any outright sale to a Chinese or other foreign entity will be no different from a foreign owned company that does not have strategic Malaysian partners.

What is required is a change from Business As Usual (BAU). Sabah must go into the frontiers of modern technology and create a complete bio economy. From our limited knowledge, no one is even looking at the forest economy, except to export pulp back to China!

By all means, bring in foreign help and technology, IF they are able to build up an industry, create a sustainable industry and create meaningful jobs and eco-system. Malaysian companies must be part of the equation, even better if it’s a qualified Sabahan company.

Yes, the state government should rightly look out for the long-term interests of Sabahans because, to quote Datuk Lo, the deal is “no chicken’s feed.” It is valued at over RM1.2 billion and its impact on the Sabah economy is undoubtedly immense.

Grant Thornton and the powers that be should avoid playing deal maker and not compromise the industry in Sipitang. The Malaysian people expect better. The Sabahan people especially have an uncanny ability to sniff out a bad deal. Generally, commercial deals should not be hijacked as it sets a dangerous precedent for future deals of this nature for foreign investors.

In the final analysis, Datuk Lo did not mention those primarily impacted by the delay and deadlock – the 1,500 current employers of SFI whose jobs are at stake as the deal is hanging. As this drama by Grant Thornton and the government continues, it is the livelihood of these individuals and their families which are most drastically impacted.

Respectfully, Datuk John Lo is an experienced figure and an adept writer. However, he seems to miss the most obvious points and as such, draws severely misguided conclusions. We are sure Datuk will agree that Sabah leaders should stop exploiting our precious natural resources for low level commodity exports. It is now the time for Sabah to innovate and de-commoditize our forests!

The billion-ringgit question – what is stopping Sabah from being the world leader in building a respected, transparent and sustainable forest economy? 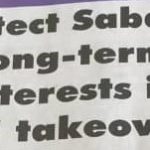