KOTA KINABALU: The governments of Sabah and Sarawak are open to working together to set up their own airline to boost the economy and connectivity in the region.

“I think we have no problem with the airline idea because both states already have their licences – Sarawak has Hornbill Skyways and we have Sabah Air,” he told reporters here yesterday.

He added that many rural areas could benefit from such a facility, which would enable people to travel to remote places in the states.

Abang Johari had brought up the idea during a dinner hosted by Shafie in Sabah.

He said Sarawak acknowledged that it could not depend fully on the federal government to achieve the goals it would set out in the 12th Malaysia Plan.

“Tourism and services (are two areas) we can learn from Sabah,” he added. “We have to change our approach because connectivity is important.

“Maybe Sabah could consider working together to form a jointly operated airline with Sabah.”

He later told reporters that having another regional airline for Sabah and Sarawak would boost the tourism industry in Borneo, particularly in East Malaysia.

“This is a suggestion from Sarawak. If we can do it, then good. If we can’t, then we will find another alternative.”

He also said Sarawak was open to relaxing immigration control, to facilitate more mobility for Sabahans entering the state. However, he said this would be difficult for now due to certain factors.

“You and I know the other factors – the unknown factors that may affect us, especially when we have a geopolitical situation. We also have a lot of refugees and so on to consider.

“The time will come,” he added. “Now it is a free sort of entry between Sabah and Sarawak, but perhaps one day we will want to relax a bit more so that it will be free flow again between the two states.”

He also suggested a power grid in Borneo to expand potential collaboration between Sabah and Sarawak.

He said Sarawak Energy Bhd is in talks with Indonesia to form a company to exploit hydro power potential to supply electricity to Kalimantan.

“One day we can generate power for the whole of Borneo,” he said. 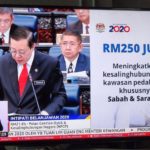 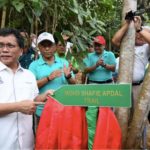