SIPITANG: The State Government will find ways on how it can increase its shares in the Sabah Forest Industries (SFI) Sdn Bhd.

Disclosing this here yesterday, Chief Minister Datuk Seri Panglima Shafie Apdal said, as it stands the state only holds two per cent of the total shares in SFI.

“For now, we will determine the direction that we should take to ensure that we can enhance our participation (in SFI) at the state level,” he said, who is also the Finance Minister.

He pointed out that the ownership SFI had changed numerous times.

Shafie stressed that the increase in shares is for the benefit of the people of Sabah as a whole, not just to certain parties.

“This will give us assurance in the sustainability of our (timber) industry in the future,” Shafie told reporters when met during the Irau Rayeh Lundayeh Sabah Festival at the Lundayeh Cultural Association Sabah (PKLS) Complex yesterday.

However, when reporters asked him to divulge more details on the plan, Shafie said that he could only do so at the right time.

Earlier that day, in a separate speech at the ‘New Sipitang – Clean and Beautiful’ launching ceremony, Shafie said that it was imperative for the State Government to study the background of any of potential investors in the state.

“We have to check on their credentials thoroughly – their financial capabilities, market value, expertise, technological advancement and whether or not they had set up factories in Sabah before.

“If they have all these, that would indicate that they have potential; these are the things that we must look at,” he said.

He reckoned that investments should be long term instead of short term venture.

“It’s (SFI) not about mere profit; we want it to be a win-win venture for both the investors and Sabah, especially Sipitang,” he added.

During the event at the PKLS Complex, Shafie also announced that he would be allocating RM400,000 to the association, for the benefit of the Lundayeh community. 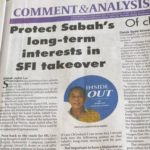