Since the Warisan-led Government took over last May, economic growth has come to a standstill. There have been no significant developments save for some ‘forward-looking’ statements on budget allocations and so forth, which is of no use!

People on the ground are worried and doubtful of the capabilities of the new state government. This was never the case in previous years. Things today are either moving very slowly or not at all. If this is not addressed quickly, it will be detrimental to the people. Businesses would be affected, unemployment would sky-rocket and crimes escalate to new heights.

The question to ask is what is the state going to do about this and when will people see real growth. This short article gives an overview of the recent changes in Sabah’s economic indicators and the outlook for the year 2019. We will answer two questions, namely:

1. How has Sabah’s economy performed in the past few years?

Investments in Sabah Development Corridor (SDC) has clearly gained traction that by 2017, Sabah recorded its annual GDP growth at an admirable 8.2 percent – overtaking all the other states in Malaysia and surpassing the national average at 5.9%.

But strangely, in terms of unemployment rate, the percentage of people who are unemployed in Sabah was reportedly high at 5.6% in 2017! In 2018, it reduced slightly to 5.4%.

The question to ask is why isn’t the Warisan-led government doing anything to prevent the high rate of unemployment. Compare this with Australia, which recorded a lower economic growth rate of 2.0% versus unemployment rate of 4.0% (in 2017).  The state should place priority on this as this could lead to unprecedented levels of crime rates.

In terms of cost of living, Sabah recorded generally low inflation rate. In 2016, inflation rate was reported to be at 0.7% (Department of Statistics, 2017). This is relatively low, compared to some countries. Hence, generally acceptable. However, the lack of new job creation or higher wages will definitely impact Sabah negatively. The new Warisan-led government has also not been able reduce cost of living resulting in the fact that generally people are feeling there is a rise in cost of living especially for essential items.

How about poverty rate in Sabah? Poverty rate has reduced significantly by 2017. Poverty rate was 33.1% in 1984, 19.7% in 2009, while in 2016, the poverty rate had reduced to 2.9% (Department of Statistics, 2017). While the latest numbers are not out yet, poverty rate in 2018 is not expected to go down as there has not been any new initiatives or support for on-going programmes by the current government for the hardcore poor in Sabah.

How has Sabah’s external sector performed? Despite the slowing down of the world economy, Sabah’s export grew at 1.38%, while import falls by 18.3%. Sabah’s trade balance position has improved where the trade surplus amount expanded by more than 100%. The drop-in imports could partially be attributed to the depreciation of ringgit.

With the previous years’ record, despite the slowing down of world economy, Sabah has been able to grow within the range of 4-6%. Given the budget announcement for 2019 by YAB Chief Minister, Sabah’s economy will be facing a lot of challenges ahead.

It very much depends on various factors such as world economic condition, the China-US trade dispute, fluctuations of oil price, fluctuation of other world commodity prices, exchange rate fluctuations, law changes, policy changes, as well as security and stability among others that may affect Sabah economy in general and the demand for Sabah’s export products. Even the tourism industry, once a bright spot, may see a decline. The number of empty service residences, shopping malls and low occupancy in hotel rooms throughout Sabah is a clear indication of this.

The current political situation and unnecessary interference by the new Sabah government in businesses as a result of politics will also negatively impact investor sentiment and creation of new jobs. It is pertinent to note that domestic driven private investments in the state economy is crucial to drive continued GDP growth.

The state should support and facilitate business growth and expansion rather than be an obstacle. The policies and strategies should offer greater latitude to companies to ensure unencumbered expansion. This will help to mitigate the increasing unemployment rate in the state.

Reliance on only China investments will not realize the stimulus the state economy needs as it will be a ROI-led, short term play. Furthermore, the imposition of strict capital outflow regulations in China will severely impede any hopes to bring in new large-scale investments.

The issues around Brexit and slowing world growth will also challenge any new investments from the EU, Japan and Korea.

The Warisan-led Sabah state government must look at encouraging domestic investments, perhaps even allowing incentives for JVs with foreign companies to continue the economic growth and job creation momentum. This is time for pragmatic decision-making for the benefit of the workforce and graduates in Sabah. 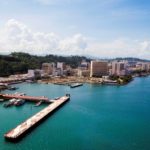