The Chief Minister’s poor handling of Amarjit Singh’s appointment as Director of Sabah Water Department has created a political mess (for him).

There are a number of things that ‘don’t add-up’ to the appointment. What is the chief minister’s motive for keeping Amarjit as Director of Sabah’s Water department? What is Amarjit supposed to deliver that is so important, in his role as Director?

Let’s look at how it all started.

Sabah Progressive Party President and former chief minister, Yong Teck Lee sought a court declaration to deem the appointment of Amarjit Singh in August 2018 as unlawful. The suit was filed together with a Tawau businessman, claiming Amarjit’s appointment was in violation of the law and that his appointment was because of his position as Warisan Division Secretary in Putatan.

Is Shafie Apdal and Peter Anthony keeping Amarjit Singh as Director to implement the PAPAR DAM project? Because if Amarjit Singh’s appointment is ‘illegal’, then the ‘Letter of Intent’ he signed becomes invalid too!

Looking at the contents of the LOI, it appears that proper procedures were not adhered to prior to issuance of the letter. Based on a mere ‘presentation’ on 22 August, the two companies were shortlisted for the controversial RM2billion project!

The onus therefore lies with the state and federal authorities such as MACC to conduct an investigation into the matter and take appropriate action, where required. Otherwise, the PAPAR Dam could lead to a socio-economic and environmental disaster for Sabah. 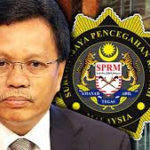