Whilst we recognise the importance of commercial development to promote economic growth and create new employment opportunities, the Sabah state government must rethink its decision and understand the negative impact of the silica sand mining project in Pulau Balambangan, Kudat. The pristine island will be open to environmental degradation if the project goes through.

This is with reference to the articles titled, “Shafie: Silica sand mining in Balambangan will have minimal impact on environment,” published in Star Online on 19 November 2019 and ‘Kilang Silika Di Pulau Balambangan Tunggu Masa Untuk Dilaksana – Shafie in Borneo Today, published 19 Oct 2019.

While we take cognizance of the Sabah Chief Minister Shafie Apda’s views that the project has the potential to become a new source of state revenue, there must also be equal consideration for the project’s negative impact to the environment. A thorough independent Environment Impact Assessment must be conducted to identify the shortcomings of the project, and if any recourse and rectification plans can be implemented.

If no proactive measures or mitigating plans can put in place on the island, then the project site should be relocated to another ‘safe’ environment where proper monitoring and control measures can be implemented.

Global environmentalist, WWF-Malaysia shared concerns about the silica project in the Balambangan island, where the coastal seas constitutes part of the Tun Mustapha marine park habitat.

Its (WWF-Malaysia) conservation director, Dr Henry Chan urged the government to not continue the project as human stressors like island silica mining must be addressed as it can lower the resilience of coral reefs.

Dr Henry said research showed that sand mining activities on islands anywhere in the world had negative impact on islands and coastal habitat, such as destruction of biodiversity sand deterioration, ‘sinking’ of island phenomena and sedimentation.

Sediment and pollution from mining activities can cause the destruction of the natural ecosystem, including coral reefs over time. It is best to stop the proposed silica mining activity on Balambangan Island and instead focus on the mainland, where activities can be better managed and controlled. Such would include processing and treatment of affluent from silica sand mining sites and channelled into designated (safe) waterways. This can’t be done on islands.

It is important that the State government consider the various aspects of environmental degradation before deciding on the project – despite the signing of the shareholders agreement. Nothing is ‘cast on stone’ that cannot be rescinded in the interest of the environment. 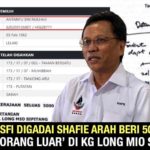 Sabah Minister’s Response To Damning Allegation: “No Such Thing” 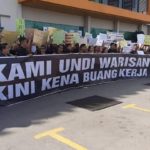